Getting a Japanese driver's license from scratch

I have recently been trying to get a Japanese drivers license in Kyoto from scratch, and it is exactly how others have written about it, an extremely time consuming and tedious process. It has been a frustrating yet humbling experience, and I am grateful for all that I have learned from it. Most Japanese enroll in a driving school, and only need to take a written test at the driver’s license test center. The caveat is that it takes a huge amount of money (around 300.000 yens = 3000 USD) and quite an amount of time (2 to 6 months). Most foreigners convert their country’s driver’s license to a Japanese one, where they only need to pass a 10 question test and a practical test on the test center’s track.

Unfortunately, when I first came in 2005, I had no plans whatsoever to drive in Japan, and let my Indonesian driver’s license expire (in 2007). Now, in 2013, I need to drive, and thus I am required to either enroll in a driving school (too expensive and time consuming for me) or try to get a Japanese driver’s license from scratch. Obviously, I chose the latter.

The process, as also mentioned here and here consists of:
1. Tests for the provisional driver’s license (kari menkyo/仮免許)
a. Written test (50 true or false questions)
b. Practical test (practical test on the course at the drivers license center)

2. Practicing on the road (with the provisional driver’s license) tutored by a person who is holding a drivers license for more than 3 years (for at least five days)

3. Test for the driver’s license (本運転免許)
a. Written test (90 true or false questions, 5 multiple answer questions)
b. Practical test (on the road near the drivers license center)

Praise to God, I have passed all the tests and am just waiting for the first aid class to be held on the 14th of August. After that I will be given my drivers license. But nevertheless, I would like to share my experiences for it may have some benefits.

In preparation for the written test, I studied from JAF’s rules of the road handbook. The handbook can be had for 1000 yens. You only need to call the closest regional office, and ask them to send a copy. Another book that was helpful for me was the English workbook from Koyama driving school. The workbook cost me 3150 yens, but it was well worth it. With these two resources, I was able to pass both written tests (for the provisional driver’s license and the driver’s license) on my first try. This alone saved me time and money.

What drove me crazy however, was the practical test for the provisional license. It took me five attempts to finally pass. In other prefectures, some need to make a reservation from 1 to 3 weeks prior to the test. But thank God it’s not the case for Kyoto. In Kyoto, we can take the provisional driver’s license practical test every odd day of the month (holidays excluded), without restrictions. On my first try, I boldly (and foolishly) took the test right after I passed the written test without any real practice or theoretical study. My only provision was from reading blog posts and my driving experience back in my home country (the last time I drove a car was several years ago). Rest assured that I utterly failed. The proctor didn't even let me finish the course.

On my second try, after two lessons at a driving practice (which is also owned by the driver's license center), I did better. My only big mistake was to shave the curb after the “crank”. The proctor said that I would have passed if I hadn’t.

On my third try, I went too fast in an intersection where the view was obstructed. Bear in mind that I checked right and left prior to the intersection and went slow through it, just not slow enough (I was supposed to stop and drive walking speed slow). The proctor immediately told me to stop and go back to the starting point.

On my fourth attempt, I failed because I didn’t do things “decisively” enough. For example, when changing lanes, after signaling and checking my blind spot, I was supposed to quickly change to the destined lane and not do it slowly (as shown in Figure 1). 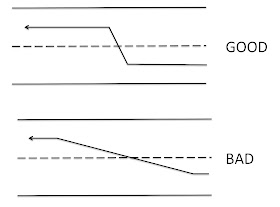 I finally passed on my fifth attempt. One of the important keys to pass in Kyoto is to be confident and decisive. ALWAYS check your blind spot after signaling for changing lanes or turning. ALWAYS signal 30 meters before turning. Basic principles can be found here and here. What helped me a lot in passing the practical test was watching the DVD in this book. Even though I could not 100% understand the language, the videos and illustrations are very clear.

The “real” practical test took me two attempts. This is done on the road near to the driver’s license test center. In Kyoto, the practical test takes around 20 – 30 minutes per person. Be extra careful with pedestrians and bicycles, because those were what failed me on my first attempt. STOP at pedestrian crossings if there are pedestrians standing there, even when they are having a chat there. Bicycles often ride on the wrong side of the road, and they will be coming towards you on your side of the road. My fault was that I didn't signal to go wide (crossing the center line to leave space for the bicycle to pass). Whenever it’s necessary to go past the centerline, ALWAYS make a signal and check our blind spots.

I wasn't really confident on my second attempt, because I went too fast when passing by a stopping truck. But I got enough points to continue to the parking test (there are two parts in the “real” practical test. The road test, and if we do well enough, we will need to do a parking test). On that day, the parking test was to back up into a space, and change the direction of the car (figure 2).  Thank God I passed the test with 75 points (the minimum passing grade is 70 points). 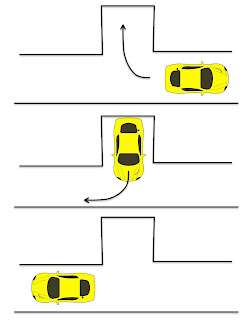 Amazingly, even after we pass all of the tests, we are still not eligible for a driver’s license. We need to follow a seven-hour first aid class at a driving school. What I didn't expect is that the schools only hold these classes once a month and there is a limit in the number of people who can participate. I called more that 10 schools, and the earliest class was 3 weeks from the time I called. At the time this post was written, I was waiting for that class, and thus I have yet to receive my driver’s license.

Nevertheless, all that is left is just formality and bureaucracy, in a couple of weeks, I will have my driver’s license (God willing).

It took me a total of 2 months to finish the entire process and 90.000 yens, which is certainly much cheaper and faster than enrolling in a driving school. The breakdown of the cost of my experience is shown in figure 3.

Figure 3. Cost breakdown of my experience in obtaining a Japanese driver’s license

As mentioned in this blog post, this method might not work for everyone, as you need to take half a day off whenever you take an exam. And dealing with the frustration of failing several times is not for everyone. As there is a sense of uncertainty whether you will ever pass the test. To be frank, I must admit that at times, I also felt like quitting. But thanks to my wife’s support, I was able to man up and finish what I started. And eventually it worked out for me. Another thing that helped me is perhaps because I drove in my home country. Nevertheless, I would have never even considered shelling out 300.000 yens to attend a driving school, so I am quite satisfied with the results. I hope that this post can encourage everyone hopeful of obtaining a Japanese driver’s license from scratch. It’s certainly doable and not impossible.
Fendrri at 3:48 PM